Trump gets booed at his rally, loses touch with supporters as he defends COVID jabs

For millions of Americans the definition of ‘fully vaccinated’ is about to change, casting them back into the outer edges of society with the ‘unclean’ and the untouchables. Trump the populist is losing his base over this one issue that increasingly defines the times. 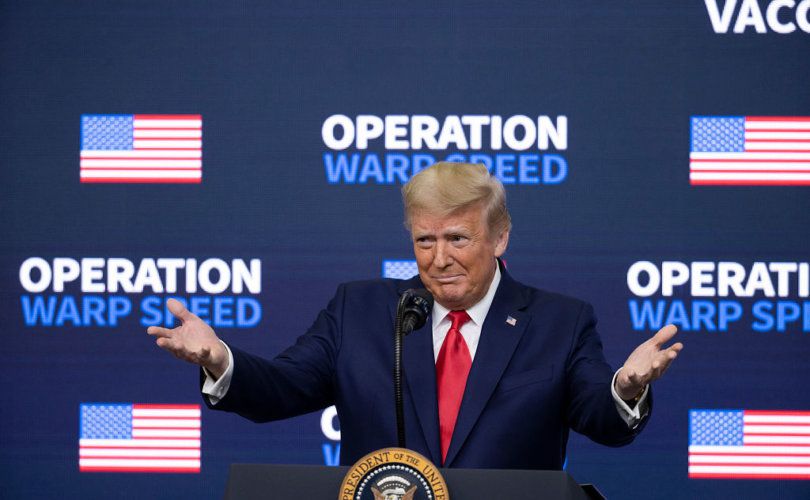 (Leo Hohmann) – Americans are growing restless over where the COVID narrative is heading, and there seems to be a growing disconnect between “we the people” and those who seek to represent us in government.

But will he catch up, or lag farther and farther behind?

On Saturday night, Aug. 21, in Cullman, Alabama, Trump got booed at one of his own rallies – when’s the last time you saw that happen?

What could be so offensive to the ears of thousands of deplorables, you ask? Let’s just say that when their leader told them COVID vaccines are “good” and people should take them, it didn’t sell in Alabama, not anymore than it has sold in Ohio, Georgia, or anywhere else. [Watch video in second tweet below] https://platform.twitter.com/embed/Tweet.html?dnt=false&embedId=twitter-widget-0&features=eyJ0ZndfZXhwZXJpbWVudHNfY29va2llX2V4cGlyYXRpb24iOnsiYnVja2V0IjoxMjA5NjAwLCJ2ZXJzaW9uIjpudWxsfSwidGZ3X2hvcml6b25fdHdlZXRfZW1iZWRfOTU1NSI6eyJidWNrZXQiOiJodGUiLCJ2ZXJzaW9uIjpudWxsfSwidGZ3X3NwYWNlX2NhcmQiOnsiYnVja2V0Ijoib2ZmIiwidmVyc2lvbiI6bnVsbH19&frame=false&hideCard=false&hideThread=false&id=1429246379323445255&lang=en&origin=https%3A%2F%2Fwww.lifesitenews.com%2Fopinion%2Ftrump-gets-booed-at-his-rally-loses-touch-with-supporters-as-he-defends-covid-jabs%2F&sessionId=8b82089c41416dc6081d95cfa608096f1691d8ec&siteScreenName=LifeSite&theme=light&widgetsVersion=1890d59c%3A1627936082797&width=550px

The crowd reacted with a string of boos, to which Trump responded:

“Nah, that’s ok, that’s all right, you got your freedoms! But I happened to take the vaccines. If it doesn’t work you’ll be the first to know, OK? I’ll call up Alabama and say, ‘hey, you know what…’ but it is working!”

This is what’s known in the business as a “leaky” vaccine.

The first scientist to warn us about the “catastrophic” consequences of launching a mass vaccination program in the heat of a viral pandemic was Dr. Geert Vanden Bossche of Belgium. We reported his findings back in March.

But there have since been many other scientists come forward with warnings. Look at the sampling of warnings below that indicated the world’s first-ever coronavirus “vaccine” would end in failure:

Even the CDC admitted these vaccines have failed to stop people from getting sick when its director, Rochelle Walensky, told NBC News Todaythat a booster shot will be needed this fall. In less than six months after people received the first two shots, they will need another. The goal posts will continue to be moved and they will need another, then another, then another.

For millions of Americans, the definition of “fully vaccinated” is about to change and they will once again be on the outside looking in, going from clean to unclean as declared by a corrupt medical bureaucracy in the pockets of Big Pharma.

Has Trump gotten his booster yet? Does he even know he is due for one? Because on this hot Saturday night in Alabama he didn’t sound like he had been informed of his latest appointment with the needle.

Trump had a rare opportunity to come clean before a national audience of his base and tell them the truth – that Operation Warp Speed was a horrible mistake, that thousands are getting sick, hospitalized and dying after being fully vaccinated.

But he wasted his time on the stage spinning establishment lies about the vaccine and retelling old stories from previous speeches about his fleeting accomplishments while in office. Those accomplishments now seem stale and out of touch with the times. Most were overturned in the first few weeks of the Biden administration.

Trump avoided any direct references to the issues Americans care about. Number one on that list is medical tyranny.

People are worried about losing their jobs over not taking an experimental injection.

People are worried about losing their healthcare if they don’t submit to the jab.

People are worried about not being able to shop for food.

Major cities have started setting up “show your papers” digital passport systems designed to isolate and discriminate against Americans based on their submission to an unproven medical experiment that now appears to be exposed as a total failure.

If you were one of the smart ones who did not submit your body to this experiment out of a well-founded suspicion that it was based more on profits for Big Pharma than on rigorous scientific testing, you will now be barred from entering almost any public facility in New York City, Los Angeles, San Francisco and New Orleans, with many other cities soon to follow.

Look around at other formerly free Western countries, and you will see where this is heading.

In France, armed guards stand at the entrance to supermarkets, making sure no one enters who is unable to show proof of vaccination. https://platform.twitter.com/embed/Tweet.html?dnt=false&embedId=twitter-widget-1&features=eyJ0ZndfZXhwZXJpbWVudHNfY29va2llX2V4cGlyYXRpb24iOnsiYnVja2V0IjoxMjA5NjAwLCJ2ZXJzaW9uIjpudWxsfSwidGZ3X2hvcml6b25fdHdlZXRfZW1iZWRfOTU1NSI6eyJidWNrZXQiOiJodGUiLCJ2ZXJzaW9uIjpudWxsfSwidGZ3X3NwYWNlX2NhcmQiOnsiYnVja2V0Ijoib2ZmIiwidmVyc2lvbiI6bnVsbH19&frame=false&hideCard=false&hideThread=false&id=1428133403824726030&lang=en&origin=https%3A%2F%2Fwww.lifesitenews.com%2Fopinion%2Ftrump-gets-booed-at-his-rally-loses-touch-with-supporters-as-he-defends-covid-jabs%2F&sessionId=8b82089c41416dc6081d95cfa608096f1691d8ec&siteScreenName=LifeSite&theme=light&widgetsVersion=1890d59c%3A1627936082797&width=550px

In Australia, some 24,000 students under the age of 18 were herded into an arena and vaccinated without the consent of their parents. Three of the jabbed children have already died. Australian citizens are forbidden from traveling more than half a mile from their homes, under threat of arrest. These lockdown rules are being enacted by local and provincial leaders under the direction of the U.N. World Health Organization and the World Economic Forum [WEF], said Royal Australian Air Force Veteran, Alan Hennessy, in an interview with Stew Peters.

All of this has happened in the span of a couple of weeks.

Things are moving at a rapid pace toward the global nightmare known as the Great Reset, which represents a way of life completely foreign to Western norms but which has the backing, financially and militarily, of the most powerful institutions in the world. Those institutions include the WEF, the U.N., the Vatican, the International Monetary Fund, the British Royal family, and the governments of the E.U., U.S., China, India and other countries.

Perhaps more important than what Trump said at his rally was what he didn’t say.

He advanced no plan to organize the opposition to this tyranny. He sounded no alarm, no warning about the CDC’s plans to take this whole COVID narrative to a new level in the U.S., including the establishment of “camps” that will identify, segregate and isolate people from the rest of society. — Article continues below Petition — PETITION: Tell University of Pittsburgh to stop barbaric experiments using human babies 4550 have signed the petition.Let’s get to 5000! Add your signature:   Show Petition Text Keep me updated via email on this petition and related issues.

Tyranny is no longer slow-walking through the back channels of America’s cultural institutions. It’s no longer hiding on college campuses. No, it’s right up in our faces, and nobody in any official position of authority wants to talk about it. Not even Donald Trump.

Trump said nothing to help us gain confidence that he has a plan to stop this medical tyranny from steamrolling into full-fledged, widespread, across-the-board tyranny. The type of tyranny where resisters get demonized, ostracized and eventually disappear from society. The camps are already being prepared, Mr. Trump, in case you haven’t noticed.

The crowd Saturday night also booed Congressman Mo Brooks, R-Ala., who is running for the U.S. Senate in Alabama and gave the warm-up speech for Trump.

Brooks said people should “stop looking back [at 2020],” and look ahead to 2022. The crowd had to correct him. They booed and started chanting “fix it now!”

With the current state of U.S. elections, it doesn’t matter who we vote for or knock on doors for in 2022 or 2024. And the Democrats aren’t governing like a group that knows it will be held accountable at the ballot box.

Even the most populist politicians can’t seem to get their heads out of the sand. We want our freedom back. We want free elections back. It really is that simple.

And when we say we want our freedoms back, we are talking about freedom not just from government intrusions into our private lives but also corporate intrusions.

Corporations at some point got the bizarre idea that they own us. They have for at least five years believed they own our thoughts, firing employees who post ideas and opinions to social media with which they disagree. They now claim to own our bodies, trying to force us to take a medical treatment we never conceded to and don’t trust.

So to all the politicians out there, current and future, either lead or get out of the way.

If you are afraid to address the real issues that are threatening to overtake the lives of your constituents, then you never should have signed up for the job of representing us. You have become a distraction. That goes for Trump and the presidential contenders all the way down to the Congress, the school board members and city councilors.

But the fact that so many political leaders remain blind to the urgency and lateness of the hour, and don’t see that we can’t wait till 2024 or even 2022, should also send a message to we the people.

We must learn to fend for ourselves. That means getting on the Internet, while it’s still available to us, and learning how to perform basic survival functions that we haven’t had to worry about in a few generations. Like how to filter water from a creek, how to know the difference between wild vegetation that’s safe to eat and others that are poisonous, how to hunt and fish and prepare meals from scratch.

Invest time in building networks of like-minded patriots in your area who understand the stakes, are trustworthy and may possess skills that you don’t. Banding together, we can do this.

Most importantly, get your spiritual life in order and ask God to forgive your sins and heal our land, because without Him, we have no hope of turning this thing around.

The time may not be too far off when we have limited access to commercial supermarkets and jobs. We may be reduced to barter and growing/gathering much of our own food.

God help us if we have to rely on the politicians.