‘God made from one every nation of men’: Exploding the evolutionary myth of creation-based racism, Pt 1

The pseudo-scientific molecules-to-man evolutionary hypothesis has actually been used and continues to be used to justify racism and to destroy faith in the only firm foundation for a culture of universal brotherhood: The Catholic doctrine of creation and the traditional Catholic reading of the sacred history of Genesis. 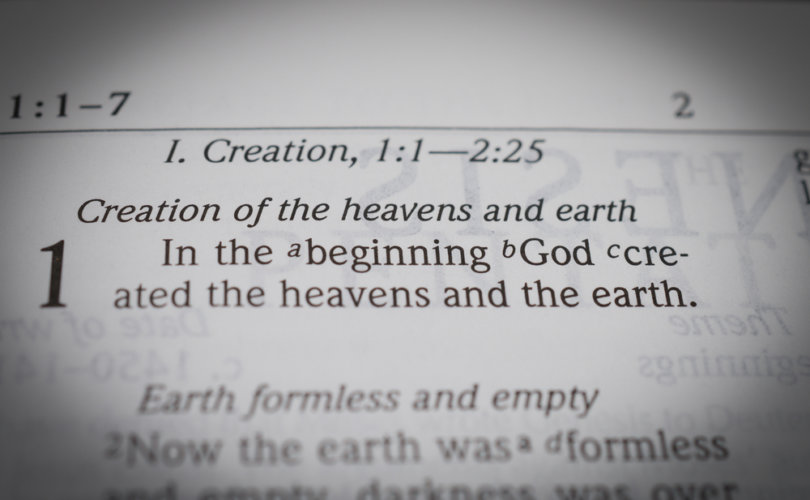 Editors note: This is part 1 of a five part series of articles on the topic, by Hugh Owen.

(LifeSiteNews) — A recent article in the journal Scientific American by Allison Hopper entitled “Denial of Evolution is a Form of ‘White Supremacy’,” managed to pack an enormous amount of scientific, historical and theological misinformation into a brief attempt to convince her readers that an acceptance of the “science” of human evolution would destroy the traditional Christian reading of Genesis which, she alleges, is and has been used to promote “white supremacy” for hundreds of years. In this series of articles, we will show that the pseudo-scientific molecules-to-man evolutionary hypothesis has actually been used and continues to be used to justify racism and to destroy faith in the only firm foundation for a culture of universal brotherhood: The Catholic doctrine of creation and the traditional Catholic reading of the sacred history of Genesis.

Genesis and the myth of white supremacy

Hopper begins her article by alleging that the Mosaic account of the creation of Adam and Eve and history of their descendants Cain and Abel has long been used to justify “white supremacy.” Without citing any evidence from the Bible or from Church Tradition, Hopper claims that Genesis has led Christians to believe that Adam and Eve were white-skinned and that “dark skin” was a consequence of the curse that befell Cain after murdering his brother. According to Hopper, recognition of the “fact” that the first humans evolved from a common ancestor with chimpanzees in Africa would redound to the glory of dark-skinned people in Africa and throughout the world and help to dissolve the myth of “white supremacy” that the Christian reading of Genesis has promoted for so many centuries.

It is a sad testimony to the extent to which contemporary western intellectuals receive indoctrination rather than education that a contributor to Scientific American was allowed to publish libels against the Mosaic account in Genesis without any serious “fact-checking” by her editors. Where, we would like to know, do the Scriptures or the Fathers of the Church, tell us that Adam and Eve were “white-skinned”? Where does the Bible or the Tradition of the one, holy, Catholic and apostolic Church teach that Cain acquired dark skin as a consequence of murdering his brother Abel?

These falsehoods may have been bandied about by some anti-Catholic members of the KKK, but they have no basis in the Word of God as understood in God’s Church from the beginning. The mere fact that a writer for Scientific American would publish this libel, with the full permission of the journal’s editors, shows that the first prejudice that all of them need to overcome is the myth of molecule-to-man evolution’s “supremacy” over the traditional Catholic doctrine of creation as a coherent account of the origins of man and the universe that fosters universal brotherhood.

Genetics, paleoanthropology and the end of the evolutionary hypothesis

In recent decades several excellent books have been written refuting the alleged evidence for human evolution. In a short article like this, we can only summarize the most important evidence against the hypothesis of human evolution and refer our readers to the sources of that evidence. The two areas of knowledge that have produced the most devastating refutation of the hypothesis of human evolution are genetics and paleoanthropology (the study of ancient humans and their fossils and artifacts).

As plant geneticist Dr. John Sanford has demonstrated in his masterpiece Genetic Entropy, cutting edge research in genetics has totally destroyed the primary axiom of human evolution that mutation plus natural selection = microbe-to-man evolution. As Sanford explains in detail, almost all mutations are harmful to the genome, but since most of them are not harmful enough to prove fatal, they are passed on to the next generation. This accumulation of harmful mutations in the genomes of plants, animals, and humans Sanford appropriately calls “genetic entropy,” which corresponds in the biosphere to the law of increasing entropy that physicists see at work throughout the material universe.

But that is not all.

Sanford goes on to show that when geneticists studied the Mitochondrial DNA that is passed down from mother to daughter in women from every major people group on Earth, they found, once again, that the Mt-DNA is very homogeneous in all of them and that the number of mutations that have accumulated in the Mt-DNA is much smaller than what the evolutionists had predicted based on their evolutionary presuppositions. Using the average number of mutations in the Mt-DNA and the observed rate of mutation, Sanford shows that the evidence leads inexorably to the conclusion that all women are descended from one woman—dubbed “Mitochondrial Eve” by evolution-believing biologists—who lived less than ten thousand years ago. Sanford also highlights the fascinating discovery that whereas the Y-chromosome is homogeneous among all men in all people groups, the MtDNA—while still very homogeneous—can nevertheless be seen to form three very similar but distinct lineages.

Those who are blessed to read the sacred history of Genesis with the Faith of our Fathers would have no difficulty in explaining the significance of this finding—which would be completely lost on the evolution-believing scientists who write for Scientific American.  As Sanford explains, the existence of the three lineages is exactly what one would expect after reading the Mosaic account of the Flood, since the only survivors of that cataclysm were Noah and his wife and their three sons—thus accounting for the homogeneity of the Y-chromosome among all men—and their wives who would most likely have come from different families, thus accounting for the three lineages that geneticists have identified in the MtDNA of women the world over. As Dr. Sanford demonstrates, taken together, all of this evidence indicates that every man and woman on earth today is a direct descendant of one man—“Y Chromosome Adam”—and one woman—“Mitochondrial Eve”—who were created in a state of genetic perfection, less than ten thousand years ago, just as God revealed in the sacred history of Genesis.

To the die-hard evolutionist who insists that the chimp and human genomes are so similar that they must be descended from a common ancestor, Sanford offers the irrefutable reply that the difference between the chimp and human Y chromosome is a whopping 53% and that the total difference between the chimp and human genomes is actually about 27%.  Since the community of geneticists has had to acknowledge that almost all mutations are harmful and that even the rare so-called “beneficial mutations” always come with some kind of “fitness cost,” the enormous difference between the chimp and human genomes constitutes proof positive that they could not possibly have evolved from a common ancestor! If this cutting-edge science were taught to young people all over the world, along with the sacred history of Genesis as understood in God’s Church from the beginning, the foundations of racial prejudice would be totally destroyed and a true culture of life and universal brotherhood could at last be established on the foundation of God’s Revelation in Genesis, confirmed by cutting edge natural science.

Hugh Owen is the convert son of Sir David Owen, the first Secretary General of International  Planned Parenthood Federation. He is also the founder and director of the Kolbe Center for the Study of Creation, the producer of the DVD series “Foundations Restored,” which provides a comprehensive defense of the traditional Catholic doctrine of creation from the perspective of theology, philosophy and natural science and which exposes the fatal flaws in the molecules-to-man evolution hypothesis in its theistic and atheistic forms.  He can be reached through the Kolbe website www.kolbecenter.org or through the Foundations Restored website where the first two episodes of the DVD series can be viewed gratis: www.foundationsrestored.com